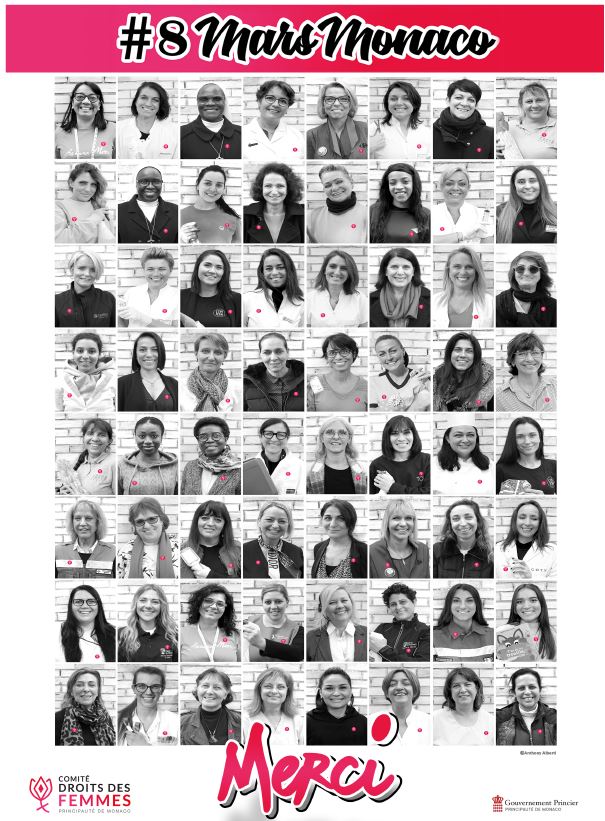 To mark International Women’s Day, the Women’s Rights Committee has produced a video to thank the women who took part in the #8MarsMonaco (#8MarchMonaco) initiative, showcasing the everyday heroines who have helped, cared, protected and nurtured, and who were on the front lines during the March 2020 lockdown.

“Due to the health crisis, it was not possible to get together, but this film allowed us to showcase, in an original way, the 64 women who lent their images to this campaign,” said Céline Cottalorda, Chief Women’s Rights Officer.

The film’s concept is based on “a voyage” through Monaco, from the Rocher to the Exotic Garden via Fontvieille, to discover the various portraits on display around the city that spread a message on women’s rights.

T.S.H. Prince Albert II and Princess Charlene agreed to take part in the initiative along with representatives from the Prince’s Government, the National Council and Monaco City Hall – all were keen to come together to thank these women and pay tribute to them.

For his part, the artist Anthony Alberti, alias Mr One Teas, who took the photographs, emphasised: “More so than in other years, my aim was to let the masks fall so that we could see all of these women’s smiles.”

You can watch the video on the Committee’s social media pages and on Monaco Info.

The #8MarsMonaco initiative can be seen at the entrances to the city, in Fontvieille and Monaco-Ville, on the Principality’s bus shelters and buses.

International Women’s Day was established by the United Nations in 1977. It is a day on which women are recognised for their achievements, while divisions – whether national, ethnic, linguistic, cultural, economic or political – are cast asid