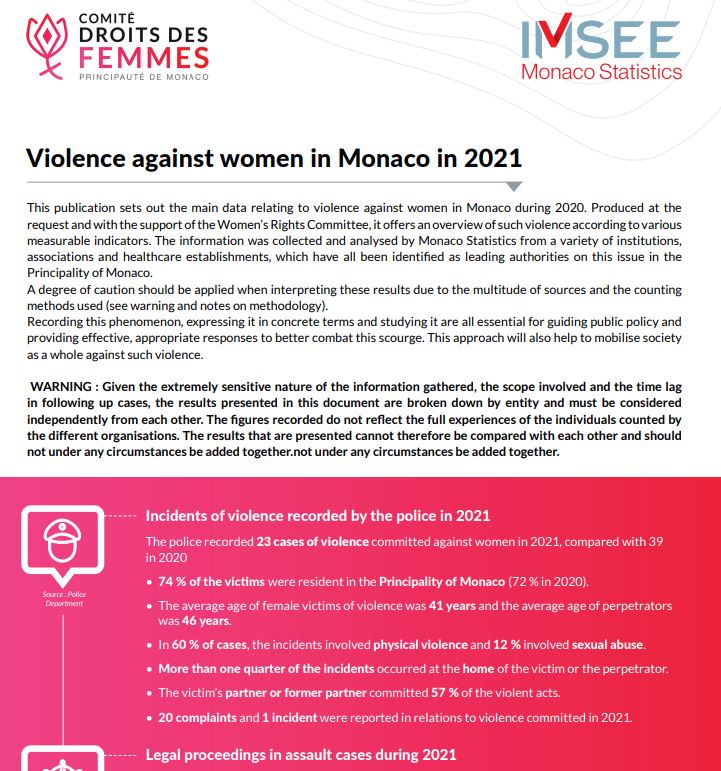 Information published on abuse of women in Monaco during 2021

The Women’s Rights Committee and Monaco Statistics (IMSEE) are publishing a third study on abuse perpetrated against women in Monaco.

The publication sets out the key data that is available for 2021 and examines incidents of abuse according to various measurable indicators.

The information has been analysed by Monaco Statistics, which collected it from a variety of leading authorities in the Principality: the Police Department, the Department of Justice, Princess Grace Hospital, the Department of Social Welfare and Social Services, and the Victims of Criminal Offences Help Association (AVIP).

The study highlights the following figures:

These figures provide valuable information, but it is nonetheless important to put them into perspective, as Alexandre Bubbio, the Director of Monaco Statistics, explains: “One female victim may have been counted several times, for example if she reports more than one incident of abuse during the year, or if she contacted several services which each recorded incidents.” He adds: “The figures presented are broken down by organisation and should not be added together.”

For Women’s Rights Officer Céline Cottalorda: “This study allows us to track abuse perpetrated against women in Monaco over time. We can see that there was more or less a general decline in incidents reported to each organisation in 2021. This may be partly explained by the continuing health crisis, which is still having an impact on travel and on people’s lives. The Women’s Rights Committee notes that violence against women remains a constant battle, as it can work its way insidiously into a home. This, in fact, was the subject of our most recent awareness campaign in November.”

Find the study under this link